Dan Gaunt squirted half a tube of Tabasco into his chilli. It still tasted like ashes. He shovelled it in anyway.

Kylie, his wife, stared at him. “Don’t you like it, love?” asked Kylie.

He slammed his napkin down. The magnets in its corners clanged as they hit the steel table. One broke off, and the freed corner floated like seaweed in a current, breaking the illusion of gravity.

Kylie went very still. “Talk to me, Dan,” she said quietly. “I can see you’re hurting, but I don’t understand why.”

A large part of Dan wanted to clam up, but he’d begged Kylie to come 375 million kilometres so he could talk to her. This was their first chance to talk alone for eight months. “I’m not hurting. Numb. I don’t understand it either. But since I got here everything’s tasteless. Everything’s grey. It’s like some dentist injected me all over.”

“It must be horrible.”

Dan made himself go on. “This probably sounds stupid, but everything’s dead here. Never even been alive. I mean back on Earth there’s life everywhere. Everything’s busy eating something else. Even in the city there’s birds and moss and stuff. Everywhere.”

“And cockroaches. Remember that revolting flat in Glasgow?”

“Kylie, I’d give anything to be there again. Earth looks very small from here. Life gets to feeling like a bunch of meaningless atoms. People are just carbon and hydrogen, you know?”

“Have you told anyone else about this?”

“‘Course not. They’d have me on the next ship home.”

Kylie hesitated, then said, “Maybe you should come home.”

Dan pressed his lips together. “I won’t get another salary like this one. I got us into debt. I’ll get us out of it.”

Dan muttered, “So who talked who into investing with Piers Mountbatten?”

“Look, he’s a pro. He made a living by taking people in. The judge said so.”

“So there’s one of us born every minute. Big help. Tell the bank that.”

Kylie took a deep breath. “We’ve been through this before. Let’s just agree to differ, and talk about you. Are you telling me you’ve been carrying this alone for five months?”

“Like I said, no-one to talk to. Seems like everyone’s in cliques. I started writing you an email, but when I wrote it down it looked stupid. Anyway, I don’t think email’s really private.”

Kylie nodded slowly. “What about the boss, that Nigerian guy you liked so much at the interview?”

“Shuwundu? He’s Kenyan, and he isn’t the boss. Anyway, he chatted up the pilot, Juanita, on the way out here, and now they’ve only got eyes for each other.”

“So what about the boss?”

Dan rolled his eyes. “Jim? Do me a favour! He thinks feelings are for wimps, and real men eat hard vacuum for breakfast. I can’t go tell him I’d like to see some butterflies now and then. Or failing that, cockroaches.”

“So why don’t you tell the owner?”

Kylie gasped. “He owns this lot? So what’s he doing out here instead of living it up on Earth?”

“Proving he’s a real man. Avoiding alimony. Besides, he’s a control freak. He wouldn’t trust anyone else to wipe their own nose without supervision.”

“Depressing bloke to work with.”

Kylie took his hand. “Look, Dan. I know you when you get down. You haven’t thought of killing yourself, have you?”

Dan stared at his bowl of chilli “No,” he lied, absently scooping a blob of Tabasco from mid-air with his finger. The zero-G product had higher surface tension, but this drop had evidently splashed off anyway.

“Well if you can cope with this lot, on your own, you’re definitely over it then.”

“It” was his father fatally stabbing his mother, then himself. At age five, Dan heard the whole thing, cowering under his bed trying to comfort his little brother and keep him quiet. When the noise stopped, he’d been relieved, but neither of them had come out until Dan crept down in the morning. Now he stared at his chilli, seeing a lake of dried blood.

The chair’s magnetic feet screeched as Dan pushed it back. “And knowing my luck, that’s Jim now.” He unfastened his Velcro lap belt and stomped off to the phone, feeling Kylie’s eyes on his back all the way.

It was Jim all right, looking angry. “Dan, get to the spaceport now. Collision alert.” The screen went blank before Dan could draw breath, much less reply.

“I’ll tell you while I get ready.”

They went to the airlock.

Dan said, “All the bigger asteroids are tracked by the computer, but there’s zillions of tiny ones too. One’s heading our way.” After five months here, getting into his spacesuit was simple. The trick was to get one foot firmly fastened into the suit before you took the other out of its metal-soled shoe. If you didn’t, you found yourself floating weightlessly around the airlock, magnetic floor or no magnetic floor. “So we’re going out to the other asteroid to push it out of the way. We don’t have to move it much – just give it a little nudge with a water gun, so it misses us.”
He zipped up the suit and gave Kylie a peck on the cheek. She looked worried. “Relax, Sweetheart. They’ve done this before. There’ll be an evacuation drill, but it’s just a precaution.”

He strapped on his fanny pack. “Honest. Now get out of the airlock, so I can go. See you.”

“Goodbye, Love. Take care.” She kissed him and went.

As Dan left the dome, he set the computerized electromagnets in his boots to ten percent G. He bounded effortlessly across the surface of Paycheck asteroid in ten-metre strides, accelerating to a reckless sixty kilometres an hour. Once the speed would have terrified him. Now it barely eased the emotional deadness.
His spacesuit lights threw a jumble of shadows. Each had razor-sharp edges, but at the speed he was going the ground was a blurred patchwork of red and black.
He passed the mine where he worked. B shift was working away, loosening huge chunks of ore. That was all they needed to do – loosen them and give them a nudge upwards. The mine was covered by a huge canopy like a funnel. Paycheck’s own rotation flung the ore to the top where the grinders and smelters converted it to stainless steel.

Dan jogged on between the hawsers that held the canopy. Two hundred meters further, and he reached Paycheck’s pole. The spaceport blazed with lights as they unloaded the Buzz Aldrin. Buzz called twice a year. It brought mail, food, equipment, medicine and replacement personnel. Yesterday it brought Kylie and Johnny. Later today it would carry on to Liveheart, a comet core. Within a week it would be back to collect Kylie and Johnny and load up with stainless steel from the smelter. Even though Paycheck was eighty percent nickel-iron, mining and smelting was far more expensive than doing it on Earth. On the other hand, transporting it to a space construction site was dirt cheap because of Paycheck’s negligible gravity. The Company was making money hand over fist. So were its employees, because the job was dangerous.

Ten minutes later Dan sat at the back of the four-seater transport as they flew to the other asteroid. The others had done this several times before, but Jim constantly barked unnecessary orders. “Remember you’re in a zero-G vacuum everyone!”

As if I could forget, thought Dan. His suit smelled of old socks. His nose was itching again. These days it started itching as soon as he got into his suit and out of an airlock.

Dan could never understand why he was still alive while his mother was dead. Sometimes all he wanted was a convenient fatal accident so Kylie could collect his insurance. Then they’d all be free of Dan Gaunt. He wished his intercom had an off button so he could be alone with his misery, but he was stuck with Jim’s hectoring, and the noisy combined breathing of four people. It had taken him a long time to get used to the intercom. Everyone within a kilometre sounded as though they were right beside you.

“Now you’re all to do as you’re told. We can’t have no mistakes. We got to stick together and do this right.”

Shuwundu jabbed a finger up, behind Jim’s back, then stared at the approaching asteroid and said, “Why is it winking like that?”

The other asteroid was indeed winking, about once every nine seconds.

Yes, thought Dan, but why would one side be so much brighter than the other?

As they got closer, Dan saw the asteroid was a peculiar shape. The bright side consisted mostly of a semi-circle, unnaturally accurate.
Shuwundu said, “It’s a ship!”

To continue reading, click here to buy the book. 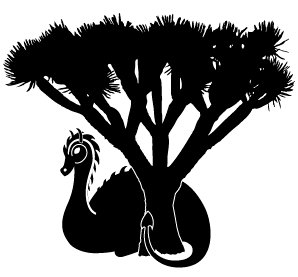 One Reply to “The Dodo Dragon: Breathing Space (excerpt)”

This site uses Akismet to reduce spam. Learn how your comment data is processed.